The Power of Compounding

In the modern world in which we live we are all in a hurry to get from point “a” to point ”b” and unfortunately investing is the same.  Those people that have achieved financial independence have done so by making a number of small decisions over a long period of time. Unfortunately unless you strike oil in your backyard, marry well or win lotto building a solid financial base takes time.

Using time to your advantage enables you to take advantage of the power of compounding, which was described by Albert Einstein as “the greatest mathematical discovery of all time” . The principle is fairly simple in that all this involves is investing a lump suminitially  that delivers a return and then reinvest those earnings as you receive them. This increases  your original investment and so on.  To take advantage you need 2 elements patience and time.

At time passes, the effect of compounding becomes more pronounced as more earnings are generated and that 5% return is applied to a larger balance. In fact after 20 years in our example, the investment would have grown nearly three-fold to more than $265,000.

However in order to demonstrate how effective compounding is, let’s consider another example. For the purposes of this example, let’s assume that Jolene and Christine make the following regular annual contributions:

Let’s assume that the investment generates a gross annual return of 8%, is invested personally, and that both Jolene and Christine are on the 38.5% marginal tax rate (including Medicare levy).

Intuitively, one would expect that making an annual investment of $10,000 over 20 years and 20,000 over ten years, at the same net rate of return, would produce a similar outcome as the total investment being made is $200,000. 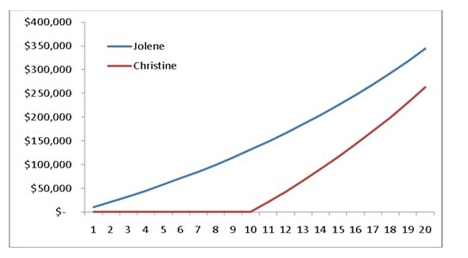 Superannuation can increase the power of compounding

In the above example, Christine and Jolene invested the amount they contributed annually in their personal names. What would be the outcome if the annual amount was contributed into superannuation?

The effect would be to enhance the effect of compounding due to the lower rate of tax applied to earnings within superannuation compared to marginal rates of tax applied to investing personally. Earnings in superannuation are generally subject to a maximum tax rate of 15%, while earnings generated by investing personally can be taxed at up to 46.5% (including Medicare levy).

Let’s consider what would happen if Jolene had invested in superannuation rather than in her own name using the above assumptions and that earnings in superannuation are taxed at 15%. The outcome is illustrated in the graph below: 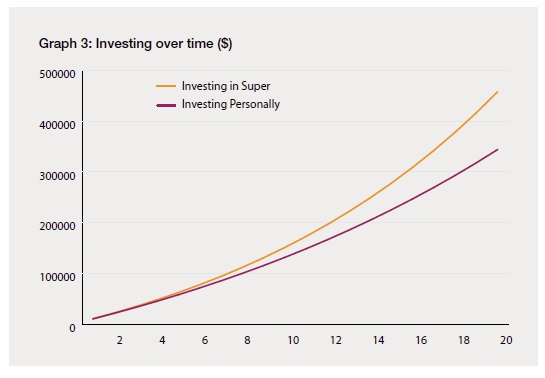 Jolene’s investment value, by investing annually in superannuation rather than personally, has increased from $344,000 to $457,800; an increase of $113,800 or 33%. This increase is not as a result of Jolene taking on more investment risk, but simply due to the reduction in the tax applicable to the returns her investment is generating together with the compounding effect of this benefit.

The key point here is that it is generally better to invest smaller amounts now and gradually build up that investment over time as an individual’s capacity to invest increases. In addition, increasing the tax-effectiveness of returns generated can also have a significant impact.

Whilst all this sounds great in theory the reality is that most people don’t have the patience to do this and look for short term solutions which inevitably fall short of what they expected. Your life is a reflection of the decisions you make, you make the right decisions and you will over time achieve your objectives. Achieving financial independence is no different, rarely is financial failure the result of one decision but rather the culmination of a series of poor decisions over time.  The power of compounding is one of life’s great free kicks and it is worth taking advantage of .

If you have any questions please don’t hesitate to contact us at Main Street Financial Solutions we would love to help you.

Summary
Article Name
The Power of Compounding
Description
Using time to your advantage enables you to take advantage of the power of compounding, which was described by Albert Einstein as “the greatest mathematical discovery of all time” .
Author
Charles Badenach
Publisher Name
Main Street Financial Solutions
Publisher Logo